(Paperback Edition)
by Jane Austen
8 reviews
Save 24%
Original Price Rs. 125.00
Current Price Rs. 95.00
| /
(View Condition Chart)
Share this:
Share on Facebook Tweet on Twitter Share on LinkedIn Pin on Pinterest
Austen occupies a curious position between the eighteenth and nineteenth centuries. Her favorite writer, whom she often quotes in her novels, was Dr. Samuel Johnson, the great model of eighteenth-century classicism and reason. Her plots, which often feature characters forging their respective ways through an established and rigid social hierarchy, bear similarities to such works of Johnson’s contemporaries as Pamela, written by Samuel Richardson. Austen’s novels also display an ambiguity about emotion and an appreciation for intelligence and natural beauty that aligns them with Romanticism. In their awareness of the conditions of modernity and city life and the consequences for family structure and individual characters, they prefigure much Victorian literature (as does her usage of such elements as frequent formal social gatherings, sketchy characters, and scandal).

Your services are very good and the book came in a very good condition, it was packed really well. The handwritten note was so cute and I really liked the bookmark. Looking forward to order more books 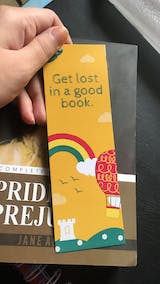