Istanbul: Memories and the City

About: A shimmering evocation, by turns intimate and panoramic, of one of the world’s great cities, by its foremost writer. Orhan Pamuk was born in Istanbul and still lives in the family apartment building where his mother first held him in her arms. His portrait of his city is thus also a self-portrait, refracted by memory and the melancholy–or hüzün– that all Istanbullus share: the sadness that comes of living amid the ruins of a lost Ottoman Empire.As he companionably guides us across the Bosphorus, through Istanbul's historical monuments and lost paradises, its dilapidated Ottoman villas, back streets and waterways, he also introduces us to the city's writers, artists and murderers.Like the Dublin of Joyce and Jan Morris' Venice, Pamuk's Istanbul is a triumphant encounter of place and sensibility, beautifully written and immensely moving.

(The product details have been sourced from Goodreads)

One beautiful memoir with pure essence of writer’s childhood. So soothing, poetic and the words brought out the visuals in my mind. Vocabulary is intermediate. There is a lot of Turkish terms so it would be better if you have a mobile phone by your side while reading. Anyone who loves going through ancient history, lifestyle and some beautiful memories amidst them, this book is a must read! And thank you bookish santa for making this available for a great deal! :) It’s more than worth the amount! 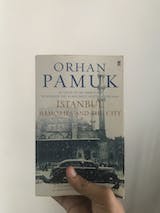 The book is brand new and a great buy for the price. I wish to continue to shop with Bookish Santa in future. This will be my first preference for my book needs now on! There was just one thing which was a little disappointing! The price displayed was 299/- while it was actually 349/-.