Successful in deciphering Krishna's puzzles and retrieving the Kaustubha locket, Anirudh finally accepts his destiny as Kalki--the tenth avatar of Vishnu. However, with the ever-perilous world moving too fast for him to keep up with, he is taken under the wing of an esoteric society created for his protection.

As ancient allies watch over him from the Himalayas, Anirudh moves to find the greatest weapon in the universe hidden in the fabled submerged palace of Dwarka. However, the Demon of Time, Kalarakshasa, yearns to possess it as well. In an ultimate showdown, the cloaked sorcerer faces the last avatar of Vishnu on the battlefield.

Will it be long before Kali, the Lord of Evil, takes up the reins of the mortal world? And will the darkness brought upon by the Kali yuga soon eclipse the earth?

This was the first time that I ordered from this site and I am really happy with their service. Any bookworm loves to possess different bookmarks and 'Bookish Santa' rightfully fulfills this desire. Talking about the condition of the book, it was also very good. I received my parcel on time despite the lockdown. So, my first experience with Bookish Santa was really nice.
Though the content of the book was not very enticing. It would suit the age group of 12-14 years and grown ups may find it monotonous at times. 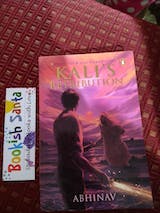